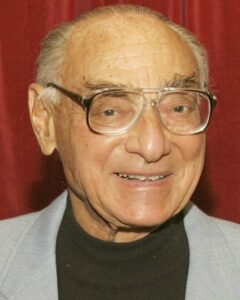 Isadore J GoldsteinI5
b: 28 FEB 1919
d: 1 NOV 2007
Biography
From my perspective, the defining event of Is\\' life was his mother\\'s suicide when he was seven years old. Not only did he find her with her head in the oven, but she had been depressed for years and perhaps hadn\\'t been emotionally available to her young son during his formative years. After she died and before his father Sol remarried seven months later, he and his father lived first with one of Sol\\'s brothers and then the other (Shimon and Meier and their families). Jeanette was sent to live with Mollie\\'s sister Ida Zlotnick. Is said that every time they moved he was promoted in school (possibly an exaggeration!) because he was so smart. His intelligence is one of the other defining characteristics of which he was very proud, as was his father. Is always considered himself to be an intellectual.

He was also a Leftie, as were many New York Jews; in fact, he was a member of the Young Communist League (YCL). He related that he was arrested twice in his life: once for lowering the straps on his bathing suit at Coney Island, which was considered indecent, and once for littering while passing out pacifist flyers for the YCL.

He graduated from New Utrecht High School at age 16 and then spent seven years at Brooklyn College night school, studying Economics. During the day he worked for the Sanitation Department. I remember him telling me a grim story of working at an incinerator, where he was "chained to the wall" for his safety. I had images of the fires of Hell when he told this story. But mostly, he worked as a "White Wing," pushing a cleaning cart and sweeping the sidewalks, gutters and streets. He did his math problems in chalk during his breaks. In 1942 when he graduated Magna cum Laude and received scholarship for graduate school, he was interviewed and had his story and photo in the newspaper; the story was picked up on the wire service and appeared in papers around the country.

He met my mother Ethel Battalen at a house party, what she described as being a "poor girl\\'s sorority." They danced together and she asked him a question to which he answered, "None of your business." We never knew what the question was until many, many years later, probably not until the 1970\\'s. It was, "Are you a member of the Young Communist League?" It was a reasonable question, given the times, and Ethel herself was a member. But because of the Red Scare and McCarthyism of the 1950\\'s, it was considered unsafe for children to know of their parents\\' past as communists, not without reason. After the war, Is took an exam to work as an economist for the Federal government and though he received very high marks, was not hired. He told me that it was because he was Jewish, but I think it was because of his history as a communist.

Although he had a draft deferment due to poor eyesight, he enlisted in the Army reserves in September 1942 and was called up in March 1943, to report to Fort Dix; his military ID was #13-113-464. He was sent to a Replacement Depot for a couple of months in Shenango, Pennsylvania and told to find himself a detail (task) in the orderly room. He slept there three nights in a row and had access to blank 3-day passes; someone forged a colonel\\'s name, so every other week he returned to New York to see his wife. The Military Police came to look into these improprieties and the only guy they arrested was the one who had a legitimate pass.

Is was sent to radio repair school in Philadelphia and assigned to the US Army 65th Signal Battalion, a combat support and communications organization. Is was in the Headquarters Company, which included administrative work and radio repair. They trained in Fort Lewis, Washington and Camp Bowie, Texas before shipping out from New York on the SS Esperance Bay on October 14, 1944, six months after D-Day. They landed in Liverpool nine days later and on December 29, landed in Rouen, France. The battalion was active in France and Germany until they left in November 1946.

Is related incident that occurred in Colmar, Alsace-Lorraine, France. He was on guard with a guy named Roller, who had just shown him a photo of his new baby and wife. They were under attack from a railroad gun was hitting the parking lot where generals were staying, every 10 minutes. Suddenly they both felt something coming; Roller was hit and died.

This incident was confirmed in the publication, “A Reminiscent History of the US Army’s 65th Signal Battalion (WWII), a typewritten manuscript prepared for the US Army Military History Institute, Carlisle Barracks, PA” by Spencer T. Coffey (2011). Coffey’s uncle, PFC Diamond Ford Spencer, was killed in the attack on Colmar. I received a copy of this document along with the Headquarter Company’s service locations, from a very nice Operations Clerk in Carlisle, Lori Wheeler.

The service locations record was crucial in resolving another mystery: when my parents died in 2007 and 2008, I received their photo albums. The photos from the army years were all labelled carefully, except for two which, when I saw them, took my breath away. They were photos of an atrocity, with corpses lined up on a field and piled up in front of a building. My father had never said one word about this. With the help of the service location record and the US Holocaust Memorial Museum, I was able to identify the location of the atrocity. It occurred on April 13, 1945 in Gardelegen, Germany; the following day the 65th Signal Battalion was sent to take photographs.

After the war Is and Ethel lived with her parents at 1320 East 7th Street in Brooklyn, NY, while Is worked on a master’s degree in Economics and Ethel taught at Yeshiva Ohel Moshe. He did not finish, for reasons unknown to us, and in September 1950 moved the family to Detroit, where he spent his career as the Executive Secretary (director) of the United Hebrew Schools. Is and Ethel were members of the Sholem Aleichem Institute, a Yiddish-based social and intellectual organization; the children all attended its school. This formed the basis for their friendships and social life.
Is loved classical music and opera, building things, repairing small engines, dancing and the outdoors. After spending two weeks at camp as a ten-year old, he had always wanted to own land of his own. He bought land in Lapeer County, MI and built a small house and barn, dock and raft for the small lake.

To supplement his income, Is bought a couple of apartment buildings in the 1960’s, thinking he could do the repairs and management himself. However, it was a bitter experience, as he the tenants caused damage and took major appliances with them when they moved. To my mind, this experience fed his growing racism.

He also was the Detroit-area representative of two resorts in Wisconsin, Oakton and Nippersink Manors. A perquisite was that the family received a one-week vacation, which we took in August. A few times we went during the winter to Oakton, which was open during that season. All the children worked in the dining room to earn money for college, which was something you could actually do in those days.

Some time after their 20th year of marriage, Is took off his wedding ring and started to date and have affairs. At year 49, Ethel had a stroke and his negligence became life-threatening. She divorced him. He eventually married a much younger woman named Lynda Crystal; it was an astonishingly tumultuous relationship. They divorced around 2002, 2003.

Sadly, in the last couple of months of his life, he was the target of very skilled scammers and lost about $250,000. He sincerely believed they were his friends and that he would be coming into a lot of money this way.

In the last week of his life, he was able to do three of the things he loved the most: he worked on repairing the lift for his scooter on his vehicle, went to the opera with his girlfriend Sylvia and spent time at the cottage. He died of renal failure and, as had always been his stated wish, his body was donated to the Wayne State University Medical School. The following summer his children buried his ashes up at the cottage.
Facts
Ancestors
Family Group Sheet - Child
Family Group Sheet - Spouse
Picture Gallery