These are the parents, siblings and eventual husband of Yocheved “Yachet” Rozenzumen, my paternal great-grandmother and mother of my grandfather Sol Goldstein (although Yachet is the youngest, the system put her at the top of the list).  From the research of Yosi Ben-Dov I now know that Yudko Rozenzumen’s father’s name was Berko; that takes us well into the 18th century. 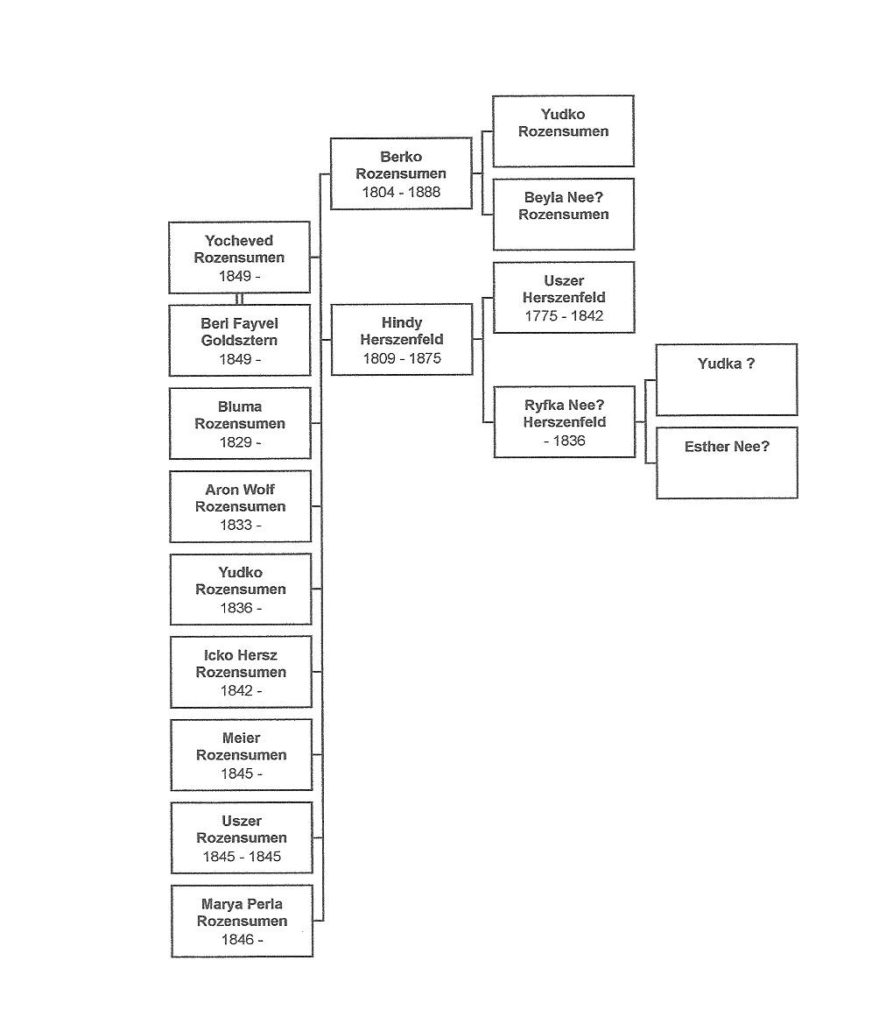 Generally, a generation is thought of as being about 20-30 years.  But because Yachet was born when her mother was around 40 and she herself gave birth to my grandfather Sol when she was about 40, these are longer generations.  I know of people today who are in their early 70’s, 60’s and even late 50’s who are great-grandparents.  But in our case, my great-grandmother Yachet was born 102 years before I was and was deceased long before my father was even born in 1919.

According to the birth records of his children, Berko was a “merchant” or “specukant.”

Metrical Records for the Family of Berko Rozenzumen and Hindy Herszenfeld

With one exception, these records were all sourced from the Polish State Archives via JewishGen.org’s JRI-Poland.  “Akt” means “record number.”  Where I was unable to find birth records, marriage and death records gave me the parents’ names and helped determine the individual’s age.  Click image to enlarge; it will open in a new window and if you click it again, it will enlarge more.  Translations follow below.

Some of these records were translated by my Polish friends Yoram and Lucyna Shenker, some by volunteers through JewishGen.org’s ViewMate translation service.  Since the official record format does not vary, I asked ViewMate translators for just the demographic facts without all the narrative language, thus facilitating the timely translation of numerous records.

It happened in the city of Terespol on the 31st of December, 1827 at 8:00.  The Jew Abraham _____Faigenbaum, the rabbi of the city of __________ appeared with the Jew Berko Rozenzumen, a single man, living with his family in Mezrich,  his father Judko Rozenzumen, a tavern owner, and his wife Beyla, living in Mezrich. Present there were Uszer, the owner of a small shop (market stall –selling salt?), father of Hindy Herzenfeld, and Rifka Herszenfeld, living in Terespol.  Witnesses were _______ Levine, age 46 and Isaac Blumen____, age 34, living in Terespol.  A religious marriage was contracted between Berko Rozenzumen and Hindy Herzenfeld.  The banns were read on December 1, December 8 and December 15 of this year in Terespol and in Mezrich.  Those present, the fathers of the newlyweds (Yudko Rozenzumen and Usher Herszenfeld) gave their permission.

In Terespol on July 2, 1833 at 10:00 a.m., the Jew Berko Rozenzumen, trader age 24 and living in Terespol, came with Meier Herszenfeld, laborer age 38 and Efraim Faynshtayn, carriage driver age 34 (all living in Terespol) and declared that on June 23 (“current month”) a baby boy was born in Terespol to his wife, Hinda Rozensumen, age 24. At his Brit Milah he was named Aron Wolf.

I cannot say that the following two birth registrations for Icko Rozenzumen and Icko Hersz Rozenzumen are definitively our Berko and Hindy’s children:  I cannot say whether they are the same person or not and the dates are uncertain.  In both cases the father’s occupation is spekulant.

Meijer, born on 6 [month=?] 1845 to Berko Rozenzumen, speculator, local, age 42, and his wife Hinda, 40
[Translator’s comment: I would look at the two surrounding entries to determine the date of birth more precisely]

*The two dates reflect the Russian Empire’s transition from using the Julian calendar to using the Gregorian, a shift that most Western nations had made by then.  Eleven days were “lost” in the process, making the first number Julian and the second number, Gregorian).

It happened on December 28, 1849 at 8:00 a.m. in the city of Terespol. The Jew Berko Rozenzumen, age 45, a speculator born in Terespol (?),who had gone to school in Terespol, along with the witnesses the Jew Chaim Lebenhartz and Michael Worman, also a coachman, age 42 and both living in Terespol, announced that a baby girl was born on December 19, 1849 at 9:00 a.m., to his wife Hindy, age 40.  The child was given the name Yocheved.

In the town of Terespol, on February 27, 1875, at 11 am, Jews Leybko Finkelshtein, 64 years old, and Rubin Herszenson, 54 years old, both religious attendants residing in the town of Terespol, appeared in person and announced that a Jew, Hinda Rozensumen, 64 years old, daughter of Usher and Rivka, died yesterday at 11 pm leaving her widow husband Berko. The fact of Hinda Rozenzumen’s death is verified, and this act is read to witnesses, and signed.