The Brest Ghetto was established in 1941 following the German Army’s Operation Barbarossa against the Soviet Union.  In November of that year the ghetto’s residents were required to register and obtain a “passport,” thus creating the Brest Ghetto Passport Archive.  Residents were listed by name, with their year of birth, parents’ names, signature and a photo was taken. 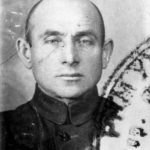 The photos have until recently only been available in the Brest City Archives; however, some can now be seen on the Yad Vashem website, where I recently found a photo of Yudel Brandt (right), the son of Tila Goldsztern and (Abus) Herszko Brandt.  In the archive, the names of his parents and the year of his birth match those of his birth registration (note that Yudko is a diminutive of Yehuda, as is Yudel). He was my father’s first cousin and the resemblance is startling.

Other Goldstein family names I have found in the Brest Ghetto Passport Archive include Yudel’s brother, Yankiel, along with his wife Dina and their daughters Feyga (age 7) and Sima (age 2).  I have found others with the correct parents’ names and birth years (or very close), including Sol’s brothers Yudel Moshe and Uszer, Yudel Moshe’s son Hersh, and a possible sister of Hersh’s, Miriam.

The banner photo across the top of this website is that of a page from the Brest Ghetto Passport Archive.  The fifth line from the bottom shows number 3940, “Brandt, Judel.”

Growing up I always thought we hadn’t lost anyone in the war, because no one every said one word about it.  It turns out my grandfather Sol lost siblings, in-laws, nieces and nephews and my father and his sister lost first cousins.