Harry’s grandchildren heard stories about his days as a clarinet player in the Tsar’s army.   He related that when they discovered he was Jewish, he was beaten up, his hands broken and all his teeth knocked out.  He deserted from the army and immigrated to Argentina.  Tasha Lebow, her sister Lori and their cousins John and Jill Politzer didn’t believe this story, until one day Harry picked up Lori’s clarinet and “wailed on it” like a klezmer musician; they were all astounded.  And, indeed, Harry had no teeth at all and wore a full set of dentures.

On March 23, 1943 he applied for a Social Security card and worked at (or owned?) the Wayne Laundry at 12641 Woodrow Wilson, Detroit and lived at 2990 Webb, Detroit, and he listed his step-mother Anna Goldenberg as his mother.

Harry’s wife Gussie (Gittel) Beckerman Challov was also from Kamenetz Podolsk, though they met in the US.  She was an “orphan,” which could mean that both parents were deceased, or only her father (as was the custom in those days among Jews).

Somehow, she managed to bring other members of her family over to the US.  Tasha says she was the “leader of the neighborhood,” was kind to people and took in stray and injured animals, and that people turned to her for advice.  During the depression she was accused of starting a fire in the laundry, ostensibly to save the building from financial ruin.  There is some thought that she also tried to hit Harry with a metal bar.  A sanity hearing was held, and she was committed to an asylum, where she lived until her death on July 11, 1953.  It’s not clear whether she was truly mentally ill, whether Harry had driven her crazy, or she simply couldn’t take living with Harry any longer.  In any event, they divorced.

Tasha Lebow and John Politzer both described Harry as having been a difficult, ornery kind of guy who held grudges.  Once a week he had dinner at the home of one of his two daughters, Esther and Bella, invariably got angry at someone in the family and would dramatically pronounce that individual “dead to him.”  Nevertheless, he showed up the next week for dinner.  Harry was a difficult enough person that when Esther married Eddie Politzer, they took Bella, still in high school at the time, with them on their honeymoon and she lived with them until she herself married.

My father, Isadore Goldstein, related to me that Harry had told him there was a letter in an envelope that was to be given to him upon Harry’s death; however, that never happened.  He had a memory of visiting Detroit when he was a child and that Harry had given him a bicycle to take back to New York with him on the train; the bike was stolen shortly after Isadore arrived home.

John Politzer relates that Harry had promised to buy him a car if his grades were good, so he “changed all the D’s to B’s” and Harry got him the car.  Lewis Klotz, grandson of Harry’s sister Ida, remembers Harry visiting them in Brooklyn a couple of times.  On one occasion Harry gave him a baseball autographed by Babe Ruth, which Lewis has to this day, safe in a clear plastic box. 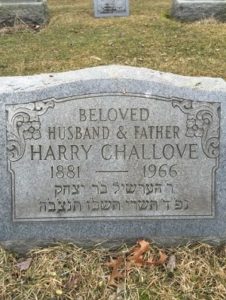 (With some information provided by Tasha Lebow and John Politzer)