From “Paper Life,” by Louise Goldstein

Spain? Russia? Or Both?

The following was related to me in the 1990’s by Stanley Chernak, the son of Rose Battalen and Ruben Chernak, Louis’ nephew (Stanley said, his favorite nephew):  Louis and Stanley sat together some time during the 1930’s and put together a Battalen family genealogy.  Louis related that his great-grandfather Haim came to Russia from Toledo, Spain, where the family had some sort of a business.  This Haim left Spain with several people, including his infant son, Lev, the whole group sneaking through the border.  They went to Warsaw and from there Lev went to Voronezh and “married a Russian woman” (this information is uncorroborated).  That would have put the exit from Spain in the early 19th or late 18th century.  I commented to Stanley that this would have been hundreds of years after the 1492 expulsion of the Jews from Spain, and Stanley said, “There were always Jews in Spain.” This, of course, is true.  When Stanley returned from serving in World War II, the genealogy document had gone missing.

Below are the known ancestors of Lev Battalen.  Haim? Battalen, the most distant relative shown, would have been the one to come from Spain:

It is beyond tempting to believe this story, and while it remains unproven, it is not implausible.  The revelations in the late 20th century of descendants of Converso families, and even whole villages in Spain such as Belleville still secretly practicing Judaism, are well-documented.  I like to think that my affinity for Sephardic music and Mediterranean foods has its source in this story, but wishful thinking is not proof.  However, there is one other tantalizing bit of evidence.  It is the Ashkenazi custom to name a child after a deceased relative.  When “Yossi” has a son, and Yossi’s father is still living, the child is named for Yossi’s deceased grandfather.  Certainly if Yossi’s father is deceased, the child could be named for him, but the name will depend on which generation is deceased.  In contrast, the Sephardim name their children for living relatives in a particular order:  The first son is named for the paternal grandfather, and the first daughter for the paternal grandmother; the second son for the maternal grandfather and the second daughter for the maternal grandmother.  This could create the strict name-order we have here:  Haim, Lev, Haim, Lev.  But this is entirely conjecture.

I always thought the name “Battalen” was a Hebrew name.  Was it “Bat Alon,” “Daughter of the Oak?”  Or “Bat Ilan,” “Daughter of the Tree?”  Was it “Beit Alon,” the House or Family of the Oak?”  All names dripping with romance…However, according to Alexander Beider’s Dictionary of Jewish Surnames from the Russian Empire, published in 1993 by Avotaynu,[1] while the name is indeed Hebrew, the meaning is less than romantic.  It comes from the word “Batlan,” which denotes two kinds of people: one who is supported by the community so that he can devote his time to studying and will be available to make minyan, and a ne’er-do-well.  One could be forgiven for thinking there is little difference between the two, but let’s suppress the urge to think of our forebears as ne’er-do-wells, and assume they were brilliant scholars who deserved to be supported.

I am sorry to have to say that I have found no trace of an Italian prince in our background; I believe that was a rumor started by Sophie Passoff Korb at someone’s wedding.

Haim Battalen married Ettel Woloff, daughter of Israel and Chashah Woloff.  Ettel is a diminutive of Esther; indeed, my mother Ethel Battalen Goldstein’s birth certificate lists her as “Esther,” though she was never known as such.  The Woloff family is closely connected to the Battalen’s in another way:  Ettel’s sister, Braineh married a man named Schulman, and their son Boris Schulman married Ettel and Haim’s daughter, Fanny.  Thus, Boris and Fanny were first cousins, with Boris being one of the older of the cousins, and Fanny one of the youngest.

As told to me by Fannie Battalen Schulman, Haim’s siblings were Simcha, Nota, Zalman, Yoneh, Hershel and another unnamed brother. It is possible that Haim was the youngest of the siblings, which would sink the Sephardic naming pattern theory, but I also heard he was the eldest, which would support it.  Go know.  Beider’s Dictionary of Jewish Surnames in the Russian Empire notes that the name Battalen was prevalent in the area of Mogilev; a search of a Mogilev Birth Index for Boys, 1864-1894, yielded a Nota Batalin who had children born in 1879 and 1891; I have no idea if that’s our Nota.  Perhaps the family went to Voronezh from that area.  Or not.

Lev’s father Haim was said by different family members to be variously a shochet (ritual slaughterer), melamed (teacher) or rabbi.  It wasn’t unusual for one person to be all three of these things.  In the same conversation with Stanley Chernak, he told me that Haim had been a rabbi, and that Lev had been meant to be one, too.  Lev rebelled, as did his sister Rose who “…rebelled against religion, so he (Haim) called her a shiksah (non-Jewish woman).”

Did Ettel have blonde curls as a girl?  I remember hearing this; after marriage she wore the traditional sheitel.  In the photo below she is not wearing the sheitel, but in this photo she is.  The children with her are probably Raya’s, David and Leda.

They were likely the only grandchildren, other than Mary Boroff who left Russia as a very young child, whom Ettel ever knew.  How sad to think of this, so many grandchildren across the ocean, but no phones, no Skype, no email.  As a grandmother myself, it is beyond imagining!  Since Ettel, Haim and Raya died of typhus during World War I, this photo must be pre-1917 (when Russia left the war).  In the years since the family photo above had been taken, she seems to have aged quite a bit, or perhaps it is the sheitel that makes her appear to have aged.

Haim was clearly a traditional man, probably with some level of knowledge and scholarship, given the roles he apparently played in the community.  Was he bewildered by his modern children?  The photo below is like thousands of other photos taken around the same time:  the parents in traditional dress, the children modern and on the move. 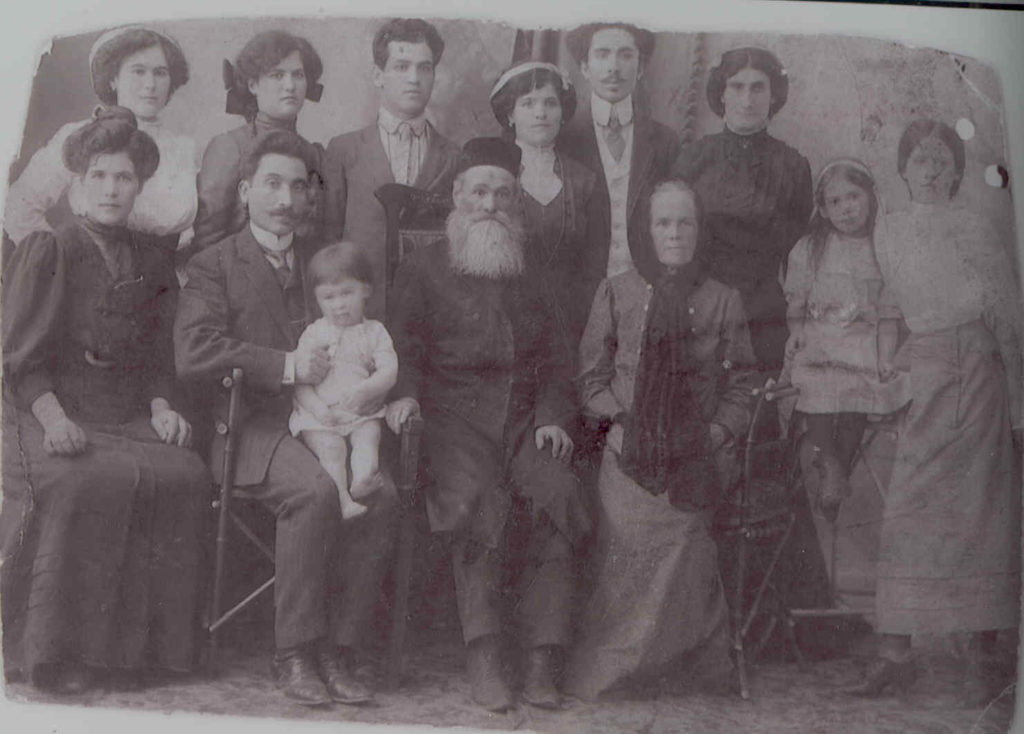 The Family They Left Behind

Fannie Battalen barely made it out of Russia:  World War I began on July 28, 1914, nine days after she arrived in the US.  From what my mother Ethel Battalen Goldstein told me, the plan had been for the last sister, Raya Batalin Popkov, to emigrate with her husband Lev and with the two parents, Chaim and Ettel.  But the war put an end to the Batalin family’s emigrations, followed as it was by the Russian Revolution and Civil War.

In November, 1995 I had a phone conversation with Stanley Chernak, Rose’s son.  He confirmed Sophie Passoff Korb’s story that Stanley had met Raya’s son David (Dodya) Popkov during WWII.   As part of the Lend-Lease program, airplanes were sent to Russia, and they needed someone who could speak Russian to train the pilots. 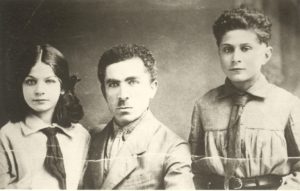 Stanley, who had always had a “command” position, was overheard swearing in Russian when he was upset by an admiral’s critical remarks.  The admiral remembered that Stanley knew some Russian, and Stanley was selected to secretly train the Russian pilots.

Leda, Lev and David (Dodya) Popkov; the children are wearing the red scarf of the Communist Pioneer Youth.

The training program, known as Project Zebra, fell on the husky shoulders of a 31-year old Bostonian of Russian descent, Lieutenant Commander – then Lieutenant – Stanley Chernak, U.S.N.R., who had four years’ experience as a Navy flyer…Because of his ability to speak Russian, he had been taken off rocket training to play the role of linguist, teacher, diplomat, and purchasing agent for 25 hand-picked Russian flying crews.[4]

(Apparently his father Ruben Chernak had been an officer and a prisoner of war during the Russo-Japanese War.[5]  Stanley told me that his father had deserted from the army, picked up his wife and son and left Russia).

In 1943-44, Project Zebra took over a secluded coast guard base in Elizabeth City, North Carolina.  About 500 Russian pilots were trained over a period of time, including David Popkov who was a pilot in the Russian Navy; he remembered the name Chernak (possibly he had heard it from his mother Raya before she died, if she had talked about her sisters in the US).  Because Stanley made the assignments, he made sure that he was the one who actually trained Popkov.

Popkov was very afraid of the KGB, who accompanied the pilots, and had to be very cautious.  He and Stanley could not meet privately, and even in public had to be very circumspect.  Stanley describes him as quiet, fairly good-looking, “youngish.”  He knew some Yiddish and they sometimes could share a few words in that language.  The Russian commanding general, who was also shadowed by KGB all the time, was leery of the name Chernak, because he knew it was Jewish, so they had to be very careful.

In the 1970’s Rae Schwartz Kreevoy located the Popkov family via HIAS; Lyova was still alive and in his 90’s, David (Dodya) and Leda were also alive and in their 60’s.

During the 1970’s Raye Kreevoy, daughter of Sarah Battalen and Abraham Schwartz, was able to locate the widower of Raya Battalen Popkov, Lyova (Lev) Popkov, in the USSR, through HIAS. Lyova was then in his 90’s and his children David (Dodya) and Leda in their 60’s.  They maintained some contact via mail but Lyova Popkov would neither reveal nor discuss Dodya’s profession. Raye reported that Dodya and Leda were surprised to learn that they had so many cousins in the US.  They had been small children or perhaps not even born when their aunts and uncle immigrated to the US, and equally small when their mother and grandparents died, so there remained no one other than their father to tell them about their mother’s family in America.  I sent a letter to Lyova a few years later but he responded to Raye saying, who is this person who says she is related.  Locating whoever is left from that branch of the family is a project for another time.

Footnotes (footnote 3 removed)
[1]Alexander Beider is recognized as the leading authority on Jewish names from Eastern Europe and has authored five major scholarly works covering the Russian Empire, the Kingdom of Poland, Galicia and Ashkenazic given names (Avotaynu.com).

[2] Conversation in the 1970’s with Fanny Battalen Schulman; conversations with Ethel Battalen Goldstein.

This site uses Akismet to reduce spam. Learn how your comment data is processed.