Our great-grandfather, Meier Yankelevich Ronen, was labeled “politically suspicious” by the fledgling Soviet government in 1922.  What does that mean and how do I know this?

In March 2022 I received an email through the JewishGen.org Family Finder from a man named Stas Tarasov:

“I’m interested in your info on “Ronen” from Loyew and Kyiv since my mother’s family, “Ronins,” were from both of these cities.”

In all my years of research, this was the first time anyone interested in the Ronen name had surfaced!

Stas is 40 years old, lives in Arlington VA and recently completed a PhD in Russian History at Georgetown University.  He is originally from Mariupol, which he called “that tragic city,” made aliyah to Israel with his parents in 1996 and was recently married.  Currently he is job-hunting and in the process of obtaining a Green Card.  He has a strong research background, having also spent years working on Jewish demographic research.

A series of emails with Stas and a Zoom meeting to explore any connection has not yet uncovered documents that could definitively prove a family connection between us, but there are many encouraging hints and clues that make further research worthwhile.  For example, we know from World War II evacuation cards that Meir and his daughter Franka were both born in Loyev, now in Belarus.  Franka was born in 1897 and our grandmother Fannie in 1895, so Fannie was likely also born in Loyev. Many of Stas’ Ronin’s were from Loyev and Kyiv. There are a lot of men named Yankel and Meir in Stas’ family, as there are in ours:  Meir’s father was Yankel and he had a son named Yankel (1900-03).

Being a researcher by trade and apparently also by nature, and being a native Russian-speaker, Stas plunged into J-Roots, a Russian-language genealogy site that is a gold-mine of information and documents.  That is where he found a card from the Kiev Police Department, dated August 19, 1922, which identifies Meer Yankelevich Ronin, living at 18 Little Vasilkovskaya, Apartment 4 as being “politically suspicious.” His terrible crime: “Has relatives in America.”

I looked for a return address in the letters that Fannie received in the US after emigrating; there were no envelopes saved for this lot of letters but I found one letter from her mother Chana that had her address at the bottom of a page.  And there it was: “M. Vasilkovskaya,” Little Vasilkovskaya, matching the street, street number and apartment number on the police card.  This confirmed that the man labeled as “politically suspicious” on this card was, indeed, our great-grandfather, Meier Yankelevich Ronin.

I wondered what it meant to be labelled “politically suspicious.”  Stas said, “It was common spying of the Soviet system. The official term is “unreliable” citizens. Usually, nothing happened to them – they were just marked, just in case… These cards were declassified just lately, which means the citizens didn’t know about them.”

Those of us old enough to remember the Cold War will remember that Soviet citizens were taking a great risk if they were in touch with Westerners, family or otherwise.  They risked arrest, interrogation, imprisonment, banishment to the Gulag and even execution. Here we have evidence of just how early the Soviet police state began functioning and how it may have affected our own family.

The fall of the Soviet Union in 1991 opened access to archives and records of all sorts, which have been trickling out over the last 30 years and have become a veritable flood in the last five to ten years.  My research has benefited from this flood and I’ll continue to share what I learn with you, my dear family. 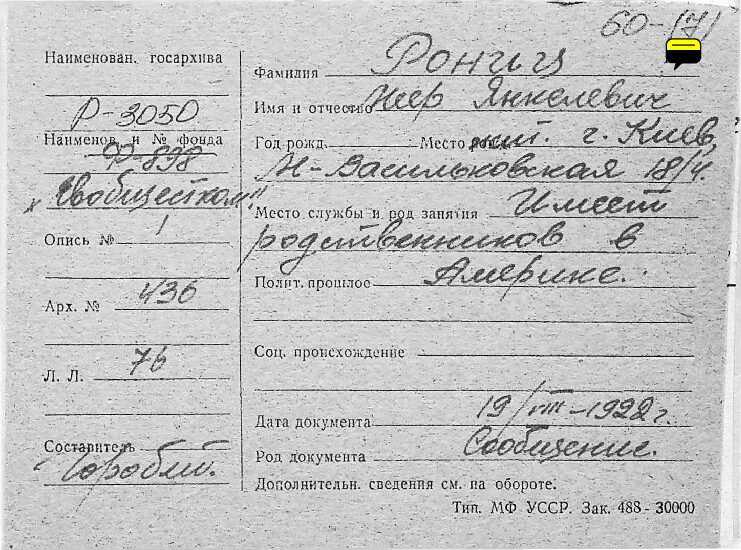 (The yellow and black text balloon was a comment inserted by Stas with the translation; it cannot be opened here).

2 thoughts on “Our Politically Suspicious Forbear”