Family in Israel!  Finally, genealogical research has revealed some connections!

Bruce and I had been invited to spend our second Shabbat in Israel this past February with our Rozenzumen cousins in Haifa, Yosi and Nitza Ben-Dov, staying over on Friday night in their home.  Here’s a reminder of how we are related:  My great-grandmother was Yocheved Rozenzumen.  Her father Berko Rozenzumen and Yosi Ben-Dov’s grandfather Avram were brothers.  So, our grandfather’s grandfathers were brothers.

Earlier that week we got an email from Yosi inviting us to an event to be held at the Tel Aviv University a few days before our planned visit.  The event was the announcement of the laureates for the Dan David Prize; Nitza had nominated her PhD. advisor, the renowned scholar Robert Alter for the prize.  It is “… an international prize which annually awards three prizes of…$1 million each for achievements having an outstanding scientific, technological, cultural or social impact on our world.”  Though we’d never heard of it,  this is a very prestigious award.  There was to be a reception and I told Yosi that we’d love to go, but we hadn’t brought anything dressy to wear (I was envisioning something like the Nobel awards ceremony), unless perhaps this was to follow the usual casual Israeli dress code.  He assured me that it did, so we happily said yes.

We had spent a good part of the afternoon with cousins Shraga and Natalya Goldshtein in Givat Shmuel, from there a relatively short cab ride to the university in Ramat Aviv.  We walked around the beautiful campus a bit until it was time to meet Yosi and Nitza at the Senate Building.  We were delighted to see each other again, it was as if no time had passed since we’d met ten months earlier in Detroit and exactly a year since Yosi had contacted me.  It’s great to find relatives, it’s even better when you feel like comfortable old friends with them.

The reception featured exotic hors d’oeuvres, raggedy students, professors and a few arty types.  One of the arty types was a friend of Nitza’s, the author Yehudit Rotem.  Though she was as chic and put-together as any Ashkenazi Tel Aviv sophisticate, this is a woman who years ago had taken her seven children and left her ultra-Orthodox life behind.  She said she has 24 grandchildren, 14 from her six daughters and ten from her one son, who remained religious.

Robert Alter had some stiff competition and was not one of the three laureates announced that evening, but we all went off together with Yehudit and her friend Tsina for dinner and conversation.

Two days later we left Tel Aviv in our rental car and headed up Highway 2 to Haifa.  We stopped along the way at Apollonia National Park, site of the important and impressive sea-side crusader fortress of Arsuf, and at Caesarea Maritima, Herod’s glorious city.

We drove through the steep Carmel hills and witnessed some of the destruction caused by the terrible fires of a few years ago and passed a memorial at the spot where a bus full of people had been caught in the conflagration.

Yosi and Nitza live on the edge of the Denya district, down the street from Haifa University, where Nitza taught literature until she retired recently.  Their home is beautiful and comfortable, with a lovely courtyard garden in the front and a stunning view from our room’s balcony. 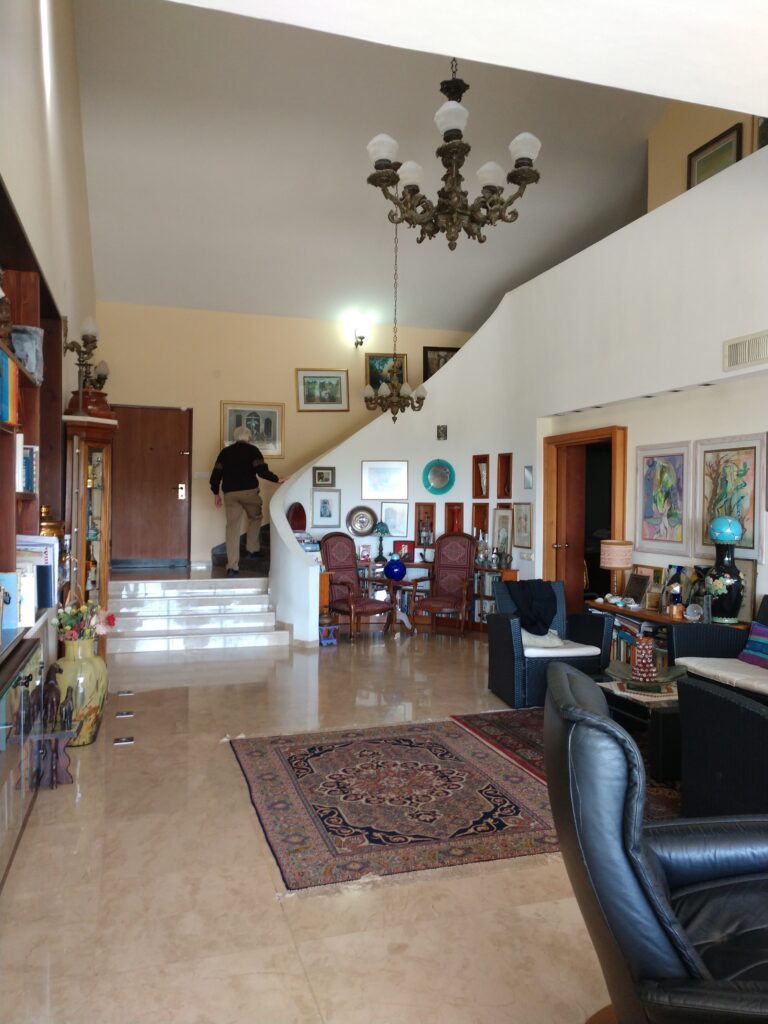 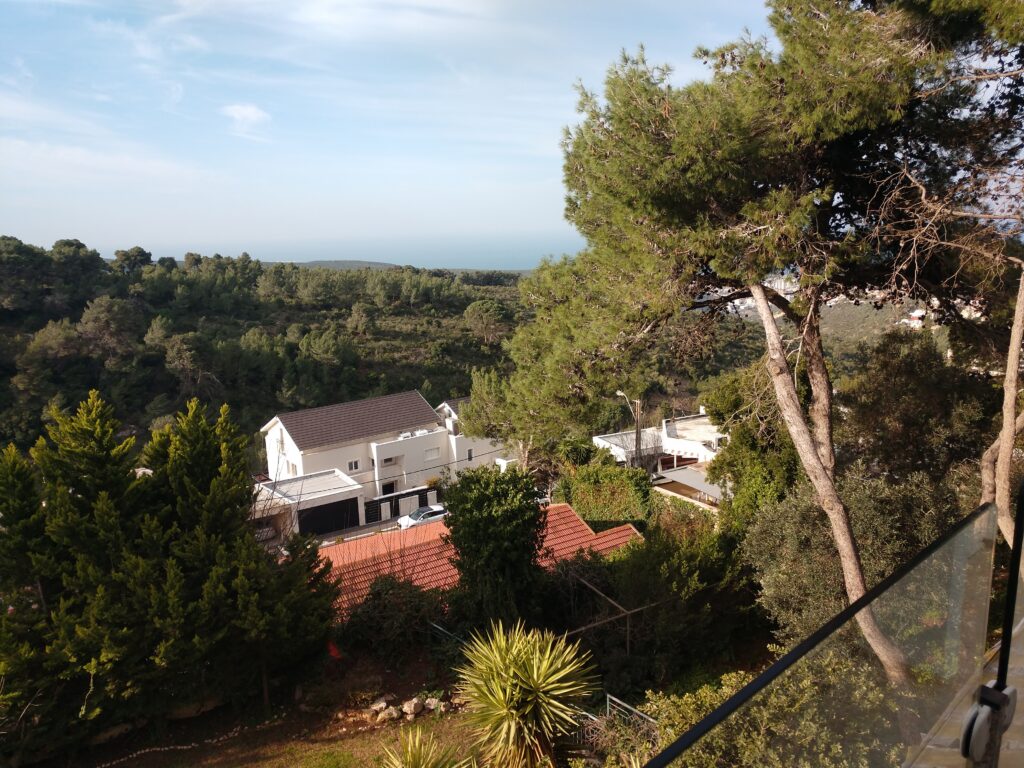 After Shabbat dinner we went on a little tour of Haifa at night.  It was very cold, very windy, the sky very clear, and the whole city was laid out before us in the dark,

the lights twinkling all the way down from where we stood on the Louis Promenade, to the port and across the bay to Akko.

We drove through the grounds of the Hebrew Reali School, the prestigious private school where Yosi is the CEO and Principal; here is a message from him on their website that talks about his family’s long association with Reali.  In April 2019, Yosi brought a robotics team from the high school to an international competition in Detroit, which is how we were able to meet.

We then went to meet Yosi’s sister Naomi Carmon and her family.  Naomi is an emerita professor of Urban Planning and Sociology at the Technion in Haifa.  Despite being in some pain, she welcomed us graciously.

We met her husband Yosi, her daughter Noga and her husband Ra’anan Cohen-Kerem and their son Itamar, recently discharged from military service.  Again, the conversation flowed easily, and we felt that we were in the comfortable presence of family.

On Shabbat, after a typical Israeli breakfast that included yummy eggs cooked by Yosi, we were off to the Ghetto Fighters’ House Museum, located a bit north of Akko at the Ghetto Fighters Kibbutz.  The kibbutz and its excellent museum were founded, not surprisingly, by survivors of a number of ghettos after World War II.  I had been there 50 years ago with my ulpan (intensive Hebrew course).  Though the museum then was much smaller, I have never forgotten leaving the sobering, difficult exhibits and exiting the museum to see the green fields of the kibbutz under the clear blue sky, bordered by a Roman aqueduct.  That peaceful, lush view, the product of the survivors’ sweat and hope, spoke volumes.

Lunch at al-Chin in the Arab village of Tamra, a restaurant frequented and recommended by some of Nitza’s former students, featured a lively crowd of families and wonderful food: grilled chicken, a million kinds of salads, hot, fresh, slightly charred pita, and the insistent Arab music that I love. 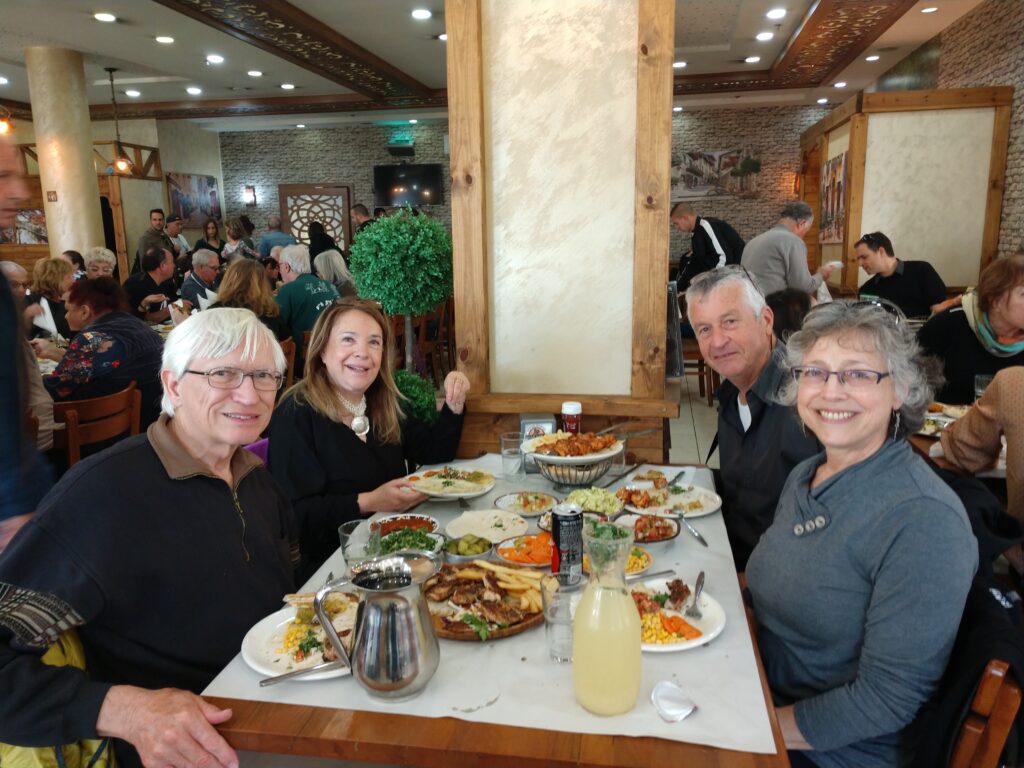 Somehow, we ended up driving back to Haifa through another village and as we drove up, down and around the steep, winding, narrow roads, which we shared with both donkeys and Mercedes, it felt like we had landed in the Twilight Zone with no discernible way out.  Eventually, of course, we emerged at a highway.

And so back to Haifa to grab our things, say goodbye to dear Yosi and Nitza and return to Tel Aviv.  They and all their family are all welcome to our home, and we hope to see them again someday, post-COVID-19.

To read about how Yosi Ben-Dov made the initial connection with us, read the blog post “The Goldstein-Rozensumen Reunion in the Motor City” from May, 2019.