Today on Zoom I met the granddaughter of Franya Ronen, my grandmother Fannie Ronen Battalen’s sister.  Her name, “Aleksandra Medvinsky,” kept appearing as my top DNA match on both MyHeritage and FamilyTreeDNA.  A few years ago, I contacted the owner of the family tree on which she appears, Eric Reznik, but didn’t hear back; it turns out that Eric is her husband.  This April, I Googled her, found a postal address and sent a letter.  I didn’t know which branch of my family she would be connected to, so I gave her lots of names.  She wrote back and I now know what happened to the family that Fannie Ronen left behind in Russia.

This is Sasha Medvinsky, Aleksandra is my full name. I received your letter and was very excited reading it.  I recognized the Ronin name right away! This name comes from my fathers’ side. The interesting thing is that I have never really met any of my father’s relatives and I have never even heard about anyone except the names that you mentioned.

So, to begin, Meer Ronin was my father’ grandfather or my great grandfather. He had 4 kids: Franya (my dad’s mom), her sister Sara, brother Avram and there was another sister who I was told I migrated to America and they never found her. In your letter you mentioned that Sara had a son. She actually did not. Sara never had kids. She was married though. I think Yan was her husband’s name. At some point her husband went to war and was killed there. The 11 yr. old boy was my dad, Victor. He was evacuated with his mom Franya and his grandfather Meer to Uzbekistan just like you wrote. Sara and her husband were in Stalingrad. My dad was born in 1931 so he was between 10yr old and 11. Franya’s husband left her when my dad was born so my dad never knew about his father. I don’t know when Meer passed but I do know that Franya my grandmother passed in 1970. I was born in 1971 so I never met her.

Sara passed shortly after Franya in 1972 (as per my mom). As I mentioned above, Sara never had any kids.

Avram was married but did not have any kids either. He passed in Kiev in 1978. I barely remember him or his wife however, I did meet both of them few times.

We immigrated to US in 1992. My dad Victor was 54 then. Unfortunately, dad passed away 18 yrs. ago in 2004 but my mom is still alive. I did confirm all your information with her.

I guess based on the information you and I have, we are definitely related and I think it’s through the fourth sister who immigrated in early 1900. What do you think? In any case, I am super excited to get to know someone on my dad’s side and looking forward to further communication. I am also on FB under Sasha Medvinsky. No other social media lol.

Hope to hear from you again.

What an exciting letter!  I learned a number of things, but first, a quick refresher so the names make more sense to you.  Meier (Meer) Ronen and his wife Chana, who lived in Kyiv (aka Kiev), had these children:

Here’s what I learned from Sasha’s message:

Fannie’s name and those of her husband Louis Battalen and their children and where they lived, which had been communicated in letters to her family in Kyiv, had been completely forgotten, though they did know there had been a sister who had immigrated.

The 1941 war-time evacuation cards found by a researcher a few years ago contained some errors, namely that Yan Lopushanskiy was not Sara’s son, as he was listed, but her husband, and Franya appeared to be childless because her son Victor was not listed on her evacuation card.  Errors on official documents is very common.

Fannie’s sister Nechamka, who died in 1919, was unknown to Sasha’s father, Victor.

There is finally some information about Avram, Fannie’s brother.

In subsequent emails with Sasha and in a Zoom call today where we were able to “meet” each other, more details were revealed:

Franya’s partner Lev Tsyrkin left her shortly after their son Victor Levovich Tsyrkin was born in 1931. Franya never remarried and worked whatever job she could find, often in a factory.  Victor never knew his father, his father’s family or anything about his father.  All his life he bemoaned the fact that he had neither siblings nor cousins.  Sasha confirmed that Franya and Victor lived with her father Meier, as stated on the 1941 evacuation card.

I got this photo of a cute toddler with adorable curls from my mother Ethel and we never knew exactly who he was. The back of the photo, marked “Kiev, 1934,” is addressed to his “aunt” and the child is identified as “Vitichka,” a diminutive of Victor, so we figured he was related in some way, but how?  It turns out that he is Sasha’s father Victor, and her family has the identical photo!

Sasha describes her late father Victor has having been a very nice, easy-going person who worked as a mechanic in a factory.  He suffered from depression, which seems to have started when he went to see his mother Franya and found her lying dead on the floor. He died in 2004.

Sara’s husband Yan Lopushanskiy was a soldier in World War II, as described on the evacuation card, and was killed.  Apparently, Sara also never remarried, and she had no children.  She taught piano for a living.  In the letters between Fannie and her family, her sister Nechamka, also a piano teacher, writes that she is giving lessons to Sara, who was musical and had a good ear.  Sasha herself loves piano and as a child in Kyiv, for three years she attended a special school for music students.  She left due to illness and then attended regular school.

Avram was married and divorced twice before marrying for the third time, and did not have children.  Sasha’s mother Asya Medvinskaya confirms what my mother Ethel had related, that Avram was in the Soviet Navy before World War II and possibly after as well.  He was retired by the time Sasha was born and hung himself in 1978; no one seems to know the reason.

Sasha was born in 1971, rather late in her father Victor’s life.  She was married at 18 ½ and gave birth to her first son, Alexei (Alex) about a year later. 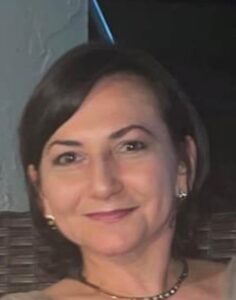 She was educated as an RN in Kyiv and immigrated to the US with her first husband, parents and baby Alexei in 1992, settling in south Florida.  After her divorce, she took her mother’s maiden name, Medvinsky, and so did her son Alex.

She is now married to her second husband Eric (Yuri) Reznik, a clinical psychologist.  They have three children:  Shawn Reznik, Joshua Victor Medvinsky and Victoria Elizabeth Medvinsky; she wanted the Medvinsky name to live on and Eric had no objection.  Sasha works as a nurse manager in the pediatric ambulatory department of Joe DiMaggio Children’s Hospital in Hollywood, Florida.  I found her to be very friendly, easy to talk with and very interested in family.

And here’s a fun fact: Eric has a brother named Kirill Reznik who is a Democrat in the Maryland House of Delegates, representing District 39.

Sasha has a brother Feliks, older by ten years.  He is divorced with one son, Lenny, and is now remarried.  Her mother Asya is still alive, in her 80’s; she and Victor did day care for baby Alex for a few years while Sasha and her first husband were at work.

Sasha and I have exchanged photos so now we have some images of her grandmother Franya Ronina, my grandmother’s sister.  To me she resembles the girl at the right in the top photo below; the outer angle of the right eyebrow, in both photos, is very pronounced and angular (try zooming in to see it clearly).  This feature is very noticeable in the photo of Franya as a young woman as seen above.  In the photo below the girl looks to be about 15 or 16; based on the letters, that’s about how old Franya would have been when Fannie immigrated.  Sasha believes the girl on the left is Nechamka, as do I, but we have no proof.

Now we have great deal of information about the lives of Fannie’s family in Russia, their family status, work, deaths.  Since Victor was the only child, there are no other people to be found in this immediate family.  Any other Ronen’s to be found will be cousins or descendants of cousins of this family.

I wish my mother and her sister had known that their cousin Victor was living in Florida during the last two decades of their lives.  Their brothers Jesse and Herbie died before Sasha and her family immigrated in 1992, but I believe that Ethel and Lucy would have been thrilled to have had that connection to their mother’s family.