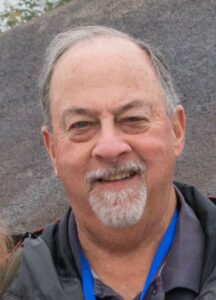 Lewis KlotzI513
b:
d:
Biography
In June of 2018 I turned my genealogical attention to my father’s cousins, the Zlotnick’s: Mollie Challov Goldstein and Ida Challov Zlotnick were half-sisters. Ida’s son Izzy had never married (though I discovered that he did marry, late in life), Bella had never married and the only other name I had was Celia, whose married name was unknown. Through the modern magic of the Internet, including using Facebook, White Pages and the marvelous website of the Reclaiming the Records movement, I was able to identify that Celia had married Benjamin Klotz and that they had had two children, Lewis and Lorraine, and I found phone numbers.

I placed a phone call to the Klotz home, spoke with Lewis and we confirmed that yes, indeed, we were second cousins: I also spoke with Lew’s sister Lorri, who was delighted to hear from me but, at the time, was in remission from Stage IV lung cancer. Due to Lorri’s health situation, I thought it prudent to try to meet sooner rather than later. Bruce and travelled to Manalapan, New Jersey in October 2018 and had a wonderful visit with Lewis and his wife Rita. While there, Lew showed us a signed baseball, including Babe Ruth\'s name, given to him by Uncle Harry Challov, which Lew now has in a case at home.

Unfortunately, a day or two before our trip, Lorri had had to be hospitalized and in the end, we were not able to meet in person. We did talk on the phone, and again later in the fall, but sadly, Lorri passed away on December 12, 2018.

Lew had a photo of a cousin of his, Anne Zlotnick Greisner with an unidentified boy, who turned out to be my father, Isadore Goldstein! We had had a copy of the same photo, which was lost in a fire at Frannie’s Goldstein’s home in the early 1990’s. Anne and Isadore were not cousins, but they shared an aunt, Ida Challov Zlotnick. Anne’s father Shmiel was the brother of Ida’s husband, Morris. Isadore’s mother Mollie was Ida’s half-sister. So, they had a connection through marriage.